Recently a friend, asked about enforcing constraints in a project architecture, I explained this to him. But I haven’t used it any of my previous projects (we’re good developers who do not spoil the code :P) , so thought of giving it a try. As shown in the video things should be straight forward but I ended up my validations never kicked in.

With some investigation, I found that when we add the DV project to the solution it adds the following package to all the projects.

If your project is made out from a .net core / asp.net core project template then it fails to install the above NuGet package and obviously the validation does not work.

How to fix this ?

I created a ASP.NET Core project based on .NET Framework (same applies to .NET Core as well). Added some class libraries and draw a following dependency validation layered diagram. 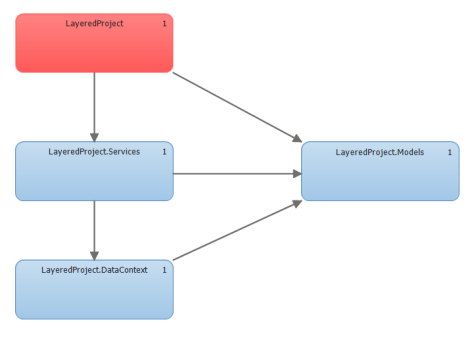 Red one is the web project (asp.net core) and others are simple class libraries. The structure is not complex. Just to check the validation, I referenced the DataContext in the web project as below.

But the validation never fired.

In order to do get this work.

After this all set with one small problem. Now, when we build the project, the validation kicks and the build will fail.

But the error response from Visual Studio is not consistence. It will always fail the build – that’s 100% expected behavior and it is right. But sometimes the error only appears in the Output window and not in the Error List. Also, sometimes the red squiggly does not appear.

You can check  / reproduce this, using the following two branches. The ‘normal’ branch has problem and the ‘solved’ branch is patch applied.